Early Vitro Agate marbles are the brushed variety. This is the type that has a thin layer of colored glass brushed on a base color.

A Victory is a transparent clear base with an opaque color patch brushed on about a quarter of the surface. The patch is purple, green, yellow, blue or red.

The Conqueror is more common than the Victory. It is a transparent clear base with the same type of patch as the Victory. However, the remainder of the marble is brushed with opaque white. These marbles are usually found in 5/8”, but examples up to 15/16” are known to exist.

There are two other marbles, similar to a Conqueror. One looks just like a Conqueror, but most of the interior of the marble is filled with translucent white filaments (occasionally the marble is opalescent). These are often referred to as “Phantom Conquerors”. They are much more common than the Conqueror and are not very collectible at this time. Victories and Conquerors date from the 1940s to the early 1950s.﻿ 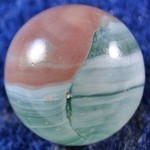 A Vitro Helmet is a three-color patch. The base glass is a transparent color. The patch is an opaque color covering about half the marble. Usually it is white. There is usually a colored stripe brushed on the middle of the patch. When viewed from the proper angle, the marble looks like a striped football helmet sitting on top of a head, hence the name. It does not appear that Vitro actually marketed this marble under the name Helmet Patch. The helmet patch dates to the 1930s and 1940s.﻿

Vitro produced a number of two seam multicolor patch marbles. Many of these have clear and wispy white as one of the colors. When viewed ninety degrees around the marble from the seam, many have a stylized “V” pattern to them. These are usually found in the 7/8” size ﻿and are called V-patches by collectors.

Vitro Agate also produced another type of brushed opaque marble called the “Parrot” that is collectible. This is a white base marble that has four patches of color on it. The patches can be blue, purple, black, yellow, and green (aventurine or not).

A similar marble is the “Sweet Pea. This is light green with a yellow, black, and red patch on it.﻿

Vitro Agate made a variety of other transparent and opaque marbles, as well as cat’s-eyes. Almost all are not collectible today. However, there are several that collectors are beginning to look for. The Vitro Agate Tiger Eye is a transparent clear base marble with four different colored patches brushed on the surface.﻿ 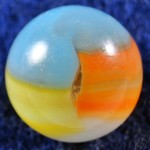 Vitro produced a small run of marbles called “Eight-Finger Ribbon”. These are a transparent color base with eight ribbons of opaque white, four on one side, four on the other. The base is bright yellow, green, red, or clear. ﻿

Vitro Agate also made some collectible cat’s-eyes that are beginning to be collected. Vitro Agate cat’s-eyes are either a four or five wavy vane type. Some have two or more colors on each vane; these are referred to as hybrids. Gladding-Vitro cat’s-eyes are six or eight strand cage style, usually in aqua glass.

While in Anacortes, Vitro produced swirls called Classics. These were the last marbles produced by Vitro Agate Company.﻿