A Banded Lutz is a marble with a single-colored base glass and  two sets of two  bands alternating with two  lutz bands. Lutz is finely ground copper flakes or goldstone. The lutz bands are usually edged by opaque white  strands.

A few  rare  examples have only  two  colored bands, rather than  the usual four, or extra  colored bands. These are  extremely rare.

Click a marble below to see a full-screen image.

An Onionskin Lutz is a marble that  has  an end  of day  onionskin core with lutz bands and/or lutz sprinkled on the  core.

The  base color  of the  core is usually white, with  blue,  green or red streaks. Usually  the  streaks are  not  as  pronounced as  they are  on an end  of day  that  does not have lutz.

The lutz can vary from a light sprinkling on the core to very heavy lutz bands. Heavy lutz on the core increases the value  of the marble. In some instances, the  lutz floats  on a layer  of clear  glass above the  core. These are  rare  and  are  sometimes called “floaters.”

Lobed and/or cloud examples are  known to exist.  These are very rare. Marbles that have colored glass surrounding the core and lutz are also very rare.

Click a marble below to see a full-screen image. 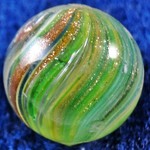 There are  examples with  a double ribbon, where each ribbon is a different color. These are  also  rare.

Some marbles are  in transparent color  glass. The  ribbon is always opaque white. These are  also  rare.

Click any marble below to see a full-screen image.

A Mist Lutz is a transparent clear  base with  a core of a transparent color. There is a layer of lutz just below the surface of the marble, floating between the core and  the surface. Usually  the core color  is green. Several examples with red or black cores have been found and these are extremely rare. There have also been some lutzes found that have a solid black core with lutz on the core itself. These are referred to as Solid Core Lutzes. 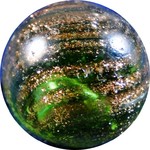