Latticinio  Core  Swirls are  cane-cut marbles. The  core consists of strands of colored rods that form a lattice-looking core when the marble is twisted off the  cane.

Outer layers usually consist of sets of strands or bands. Three-layer  and  four-  or five-layer examples are  also  rare.  There are  very  few examples known to  exist  with  completely formed latticinio cores and no outer layer  (naked core). These are very difficult to assign a value  to. Left-hand twist  examples are  also  very  rare.  Some latticinio core swirls have also been found with some mica flecks in them, but these have been very  rare.  Usually  it seems that  some stray pieces of mica  were laying on the table and  picked up when the cane was  rolled, however there are some very  rare  examples where the  mica  appears to  be  intentionally part  of the  design.

When a marble cane is made, the  larger cane is cut  into  sections approximately 2 feet long.  These more manageable canes are then used to produce the marbles. Since swirls  are cut off the end  of a cane, there are  first-off-cane and  last-off-cane examples. A first-off-cane swirl comes from the very end  of the larger cane. It either has the inner  design coming right  out  of the  top  of the  marble or the  design is only  partially present at the top.  Last-off-cane swirls  have the inner  design going only partly  into the marble, from the top.  The bottom of the marble is usually clear  or cloudy glass. This is because the last-off-cane swirl was  the nub of the cane that was left over. It was usually attached to a punty with clear glass, resulting in part  of the  marble not  having a design.

You may  also  find Latticinio  Core  Swirls  that  have a base glass that is a color  other than  clear. Usually,  these are tinted green or blue.  Tinted glass is unusual, but not necessarily rare.  Swirls  with true  colored glass, typically amber, blue or green, are much more rare. Over the last two decades, swirls  with very  bright colors, or aventurine, have been more readily available. Since most examples of these marbles had  originally (1960s  and  1970s)  been found by American collectors in England, they were referred to as “Bristol Glass” and it was originally believed that these marbles were produced there. However, the  recent discovery of original packaging from Germany now allows us to say with certainty that these marbles were produced in Germany and  exported to England.

Click on any of the images below to see it in full-screen size. 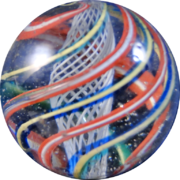 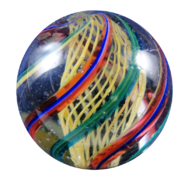 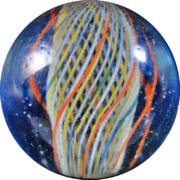 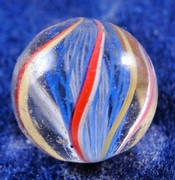 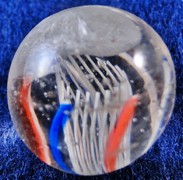 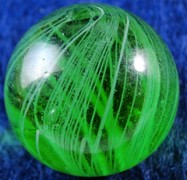 The core of a Divided  Core Swirl is formed by three or more separate bands. When the  marble is twisted off the  cane, the  bands form  a core with clear spaces in between each band. These swirls have an outer layer of bands or strands similar  to Latticinio  Core  Swirls.

The  determinants of value  of a Divided  Core  Swirl  are  the  number of  inner  bands, coloring, quality  of  workmanship, and  design. Cores with  three or four  bandss are  the  most common. Five-banded and six-banded cores  are  much rarer. The  more closely that  the  outer bands or strands mirror the  spaces in the  core, the  better designed is the  marble.

Three-layer and  four-layer examples are  rare.  Some examples have been found with  green aventurine in the  inner  or  outer bands. This  is also  rare.  There are  also  some rare  “naked” examples  with  no  outer layer.

Click on any of the images below to see a full-screen image of it.

The core of a Solid Core Swirl is formed by bands or strands of color that  are  placed so closely together that  there are  no clear  spaces in the core in between.
The core can  be all the  same color, usually white  or yellow,  or it can be a solid  color  with colored bands or stripes on it.

Solid Core Swirls usually have an outer layer of bands or strands. Left- twist  examples are  rare,  as they  are  for Latticinio  Core  Swirls  and Divided  Core Swirls.  “Naked”  solid core swirls,  marbles without an outer layer,  are  rare,  but  are  more common than  found in latticinio or divided core swirls. Examples with three or four layers are also rare. Occasionally, the  core of the  swirl will have three or four lobes. Aventurine has been found in the  cores or the  outer layers of a few  examples. This is rare.  Also,  some very  few  examples have been found in colored base glass. This is also  very rare.

There are some Solid Core Swirls (as well as latticinio core and divided core)  that  have very  bright colors. As discussed in the  Latticinio  Core section, these are  sometimes referred to by collectors as  English-style or Bristol glass, although they  were produced in Germany.

Click on any image below to display a full-screen version of it. 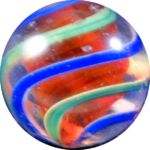 The  core of a Ribbon Core  Swirl is a wide,  flat band of color  in the center of a rod. This band is twisted when the marble is cut off the cane. The degree of twist will vary from perfectly flat (no twist) to three or four twists (creating a helix effect).

Ribbon Core  Swirls  can  either be  naked or have outer bands or strands. Naked  core ribbon swirls  are  slightly  rarer than  those with outer layers. The outer layer  of a ribbon core swirl usually mirrors the face of the ribbon, as opposed to the edge. The better designed and executed the  outer layer  and  ribbon, the  more valuable the  marble.

Click on any image below to display a full-screen version of it. 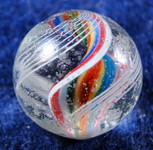 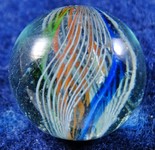