The Heaton Agate Company began operations in 1946 or 1947 in Pennsboro, West Virginia. It was originally run by Bill Heaton and Oris Hanlon. Hanlon left the company in 1947 to found the Cairo Novelty Company.

Until the early 1960s, the company produced a variety of opaque swirls and transparent swirls, as well as cat’s-eyes and game marbles.

During the 1960s, production of swirls ceased and the company restricted itself to producing cat’s-eyes and industrial marbles.

Heaton Agate Company was sold to C.E. Bogard in 1971 and became C.E. Bogard and Sons. Heaton swirls are white, cream, green or blue base. The cream base usually has green swirls, the green base has red swirls and the blue base has green swirls. Heaton cat’s-eyes are four-vane, usually with transparent pale white/blue, dark blue or light green vanes. ﻿

C.E. Bogard bought the Heaton Agate Company in 1971 and renamed it C.E. Bogard & Sons. In 1983 the company name was changed to The Bogard Company by Clayton Bogard’s son, Jack. The company was moved to Reno, Ohio, in 1987 and was reorganized as JABO Inc.

Bogard produced a variety of cat’s-eyes, clearies, and opaques. According to Jack Bogard, the company also produced an experimental marble (transparent clear base with interior green wisps) that can be found in the Mountaineer blister packs that the company marketed. Bogard cat’s-eyes are similar to Heaton cat’s-eyes, but not as well formed.

JABO, Inc., was organized in 1987 by Jack Bogard and Joanne Argabrite. The machinery was moved from Cairo, West Virginia, to Reno, Ohio, in 1987. Initially, the company produced industrial marbles, mainly opaques.

In 1991, Dave McCullough (who had spent many years as the general manager at Champion Agate) came to JABO. He began producing three or four limited runs (150,000 to 200,000) each year of “Classics” in sizes from 5/8” to 1”. Each run was different from any previous run, and the marbles were not like any other company’s—many fluoresce. They contain many innovative colors and were produced in very short runs.

In 1992, JABO, Inc. bought Vitro Agate Company, moving the Vitro machinery from Anacortes, Washington, to the Reno, Ohio, location. The only machine not purchased by JABO was a marble machine capable of making sizes larger than 1”, which was owned by House of Marbles in England. House of Marbles had paid for this machine to be built so that they could produce 1-1/4” marbles. However, according to William Bavin of House of Marbles, the machine could never produce the marbles properly. The large machine was moved to Mid-Atlantic in 1994, and subsequently was moved to House of Marbles in Devonshire, England, where it resides today.

The company produces a wide variety of industrial marbles, opaques, clearies and limited run swirls. Quite often, the glass is fluorescent and may glow either orange or yellow. The limited run colors are distinctive, often containing bright colors, and sometimes lutz or aventurine.﻿ 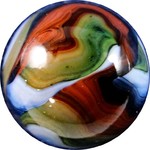 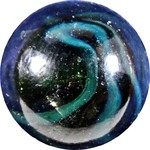