An End of Day Cloud has a transparent base glass, usually clear. The marble can have either a colored base core or no base core. On the core are flecks of colored glass that were not stretched when the marble was  drawn off the  rod.  This is different than  an  End  of Day Onionskin, where the  flecks of color did stretch.

Generally, the more colors, the more valuable the marble. Blue or red flecks  on a white  or yellow  background is the  most common. Yellow or green flecks, or a different colored background, are rarer. Brightly colored splotches are  referred to as Clowns.

An End  of Day Onionskin has  a transparent base glass, usually clear. The marble can have either a colored core or a transparent clear  core. On the  core are  flecks  of colored glass that  were stretched when the  marble was  made.

Generally, the  base color  is white  or yellow,  and  the  flecks  are  red, blue  or green. Other colors are  rarer.

Some marbles are  left-hand twisted. This is rare, although not as rare as in Swirls.

Marbles with mica are also rare, although again not as rare as in swirls. In some cases the mica floats in a thick layer above the  core, these are  known as  Blizzard Onionskins.

Single-gather, single pontil  marbles are  rarer than  is seen with  clouds. Lobed marbles have been found with  three to eighteen lobes. These are also rare.

Click on any image below to see it in full-screen.

An End of Day Panelled Cloud  or Onionskin is a cloud or onionskin that  has  two  or more distinct groups of colors.

The most common have four panels. Two of the panels are stretched red  or pink flecks on a white  or yellow  background, alternating with two panels of green or blue  flecks  on  the  background not  used in the  first panels. Panels of one  colored flecks  alternating with panels of different colored flecks, but  all on  the  same color  background are  also fairly common. Other color combinations are rarer. About  90% of the panelled onionskins have four  panels. Other numbers of panels are  rarer.

Click any image below to see it in full-screen. 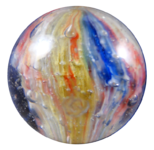 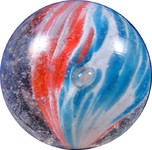 Usually,  the base glass is transparent clear. In some cases, the stretched glass forms panels. Other colored bases exist. These are rarer than  the  clear  base. The  outer layer  is usually colored, although examples of a colored base with clear  Mist have been found.

Occasionally, there is mica just below the surface of the marble. This is fairly rare.

Click on any image below to see it in full screen.

A Submarine is a  difficult  marble to  categorize. They  are  a  cross between an  end  of  day  panelled onionskin, an  indian, a  mist, and  a banded swirl.

The  base glass is always transparent. It is either clear  or  colored (usually blue or green). There are two end  of day panels of stretched colored flecks  on  the  surface of the  marble. These panels are  on opposite sides and  usually each covers about one-quarter of the marble. In the two resultant clear panels, there are stretched colored flecks below the  surface of the  marble. This creates a multi-layer effect.

Occasionally, there is mica  just below the surface of the marble or in the  panels or bands of mica,  which  is even rarer.

These marbles are  very rare and very difficult to find.

Click an image below to see it in full screen. 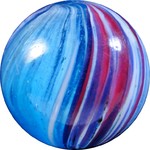