Peltier began making marbles around 1927. Their marbles were marketed under their name and also by M. Gropper & Sons. Peltier produced slags, patches, ribbons and cat’s-eyes. Peltier also produced clearies and opaques, but there is no way to identify them as specific to this company.﻿

The earliest Peltier marbles are single-stream.

Peltier Slags are single-stream marbles, as are the slags of other companies. They are a transparent colored base glass with opaque white swirled in. Peltier slags are rarer than the other companies. The most common are brown, blue or green. There are also aqua, purple, red, and yellow. The company does not appear to have produced clear or orange slags. Peltier slags are readily identifiable by the very fine feathering pattern produced by the white swirls. This is unique to Peltier. Their slags (as with many Peltier marbles) also tend to have blown out air holes which you usually do not see in the marbles of the other companies.﻿

Peltier produced several types of single-stream swirls. These are referred to as “Miller machine” marbles because they were produced on Peltier’s first marble machine, which they had acquired from Nivison- Weiskopf Company. This machine had been designed and patented in 1926 by William Miller, a machinist with the Hartford Empire Company. Peltier was successfully sued by Akro Agate Company in 1929 for infringing on their marble machine patent. However, the case was overturned on appeal when it was proven that Akro’s design infringed upon M.F. Christensen’s earlier patent. This breaking of the patent paved the way for future marble companies to use similar machine designs. Peltier later used another type of machine to produce Rainbos, etc. That machine does not have a name.

An early type of Peltier multi-color swirl was produced by the “Miller machine”. These are referred to as Miller Machine Swirls. It has a transparent colored base with several bright opaque colors swirled in. It is much rarer than the more common multi- colors where the colors are actually ribbons, not swirls. There are several types of multi-color swirls that have similar coloring to tri-color National Line Rainbos. These are also rare.

Peltier produced a patch marble which they marketed as the Peerles. The Peerless patches are very collectible today. The marbles are a two-color patch. They are identifiable by the uniqueness of their shades of color and by their design. Peerless patches are the type of marble that Peltier Picture Marbles (comics) are on. The most common color combination is black patch on white, green patch on mustard yellow, transparent green patch on white, red on white, yellow on aqua, or red on aqua. There are other color combinations, but they are rarer. The rarest patch color is called “pearlized”. This is a greenish color that has a satin shimmer or sheen to it. These are very rare. The design of the patch on Peerless patches is unique. The patches of other companies have straight edges. Peltier marbles have patches that have curved or “S” edges. This feature, along with the unique colors, makes Peerless patches easily identifiable.﻿

One of the most collectible Peltier Glass marbles is the Picture Marble or comic marble. These are Peltier Peerless patches with a black transfer of one of twelve different King Syndicate comic characters fired on the marble surface. Usually, there is an overglaze of clear glass. The twelve characters (in ascending order of rarity) are Emma, Koko, Bimbo, Smitty, Andy, Herbie, Skeezix, Annie, Sandy, Betty, Moon, and Kayo.

There are also comic marbles with a transfer of Tom Mix and with an advertisement for Cotes Master Loaf on them. These are very rare. The transfers are always on 19/32” to 11/16” Peerless Patches.

Each character has a specific marble color combination that is most common to that marble. Rarer color combinations are difficult to find and are valued much higher. There has been a Tom Mix marble reported to have a red transfer, and a black comic transfer on a 7/8” marble. These are extremely rare, and were probably experimental.﻿ 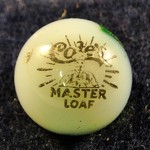 The most collectible of these are the National Line Rainbo. These marbles have an opaque base color with four to eight thin ribbons in the surface. The tri-colors can be distinguished from “Miller Machine” marbles because they have two seams on them, as if they were two halves that were joined together. Also, the ribbons are usually translucent to transparent on the tri-color National Line Rainbos, and opaque on the “Miller Machine” tri-colors.

The base glass can be a variety of opaque or transparent colors, depending on the particular type of Rainbo, and they all have a ribbon or pair of ribbons encircling the equator of the marble.

There are also Rainbos with opaque white bases and two different colors in the ribbons (similar to tri-color National Line Rainbos). Many variations on the above basic marbles are turning up all the time, although Rainbos do not seem to have quite the variety of corkscrews. Some Rainbos have been found with six ribbons instead of four, and Rainbos with different colors on either side.﻿

Peltier also produced a type of cat’s-eye. The marble consists of a single-vaned opaque color in transparent clear glass. They are referred to as Bananas because the shape of the vane looks like a banana. These marbles are fairly common, although not as common as other American or foreign cat’s-eyes. The most common colors for the vane are yellow, red, blue, green or white. Other colors are less common.

In late 1988, two Peltier workers made a one-day run of marbles. There were two styles, both about 1” in diameter. The Root Beer Float is a transparent dark amber base with a flat wide white vane in the middle. These are valued at $50-$75 each. The Nova is a black base (occasionally white base) with a colored patch on either side. ﻿