The Christensen Agate Company was founded in 1925 in Payne, Ohio. In 1927, the company moved to Cambridge, Ohio, and was located in a small building near the Cambridge Glass Company. The company had no connection with Martin Christensen or the M.F. Christensen & Son Company. However, the original incorporators may have felt that the use of the Christensen name was a good marketing move.

Christensen Agate produced a variety of marble styles. These marbles were distributed by the company itself, through the J.E. Albright Company of Ravenna, Ohio, and through the M. Gropper and Sons Company of New York City.

Christensen Agate marbles can exhibit either two seams (on opposite sides of the marble), a single seam (e.g, a diaper fold) or no seam. There is very little known about the techniques the company actually used to produce marbles, so it is unclear if different machinery produced each type of marble.Some Christensen Agate marbles are hand-gathered.

For at least a short period of time early in the company’s history, marbles were hand- gathered prior to the implementation of a feed system. We have found opaques, slags, swirls, and cobras that exhibit hand-gathered “9”s and “tails”.﻿

Generally, the colors of Christensen Agate slags are much brighter than those produced by other manufacturers. Some of the slags have an “electric” color base, usually orange or yellow, which is rarer than the non-“electric” colors. The rarest color is peach, which was not made by any other company.﻿

The most common Christensen Agate Company marbles are Swirls. Christensen Agate produced swirls in a wide variety of different patterns and color combinations. The marbles were made by mixing two or more glass colors in a single furnace. Because each color was a different density, they did not melt together, but rather created strata. Since the molten glass was the consistency of molasses, the individual stratum remained as the glass was turned into marbles.

There are an almost endless variety of colors and patterns in Christensen Agate swirls. Most swirls are in the 9/16” to 3/4” range. Peewees are slightly rarer and marbles over 3/4” are very rare.

White based swirls are the most common, but there are also many examples of swirls with no white in them. The marbles can be two-color or multiple colors. There do not seem to be any swirls with more than five colors in them. Generally, each color is opaque, although there are some marbles that have at least one transparent color. The colors can also be dull, or very bright. Bright colors are referred to as “electric.”

Occasionally, the swirl patterns form a row, or two opposing rows, that look like the flames that were painted on the sides of hot rods during the 1950s. Marbles with these patterns are called Flames by collectors today and are rare.

Another rare type of swirl mentioned above is the transparent swirl. These are a transparent base with another color swirled in. The second color can be opaque, translucent or transparent. That color is usually electric. Clear is the most common base color, with some green, yellow or blue examples known. The most common swirl colors are yellow and orange. Lavender has also been seen. These marbles are fairly rare.﻿ 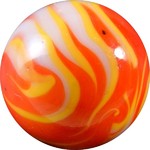 There are some swirls that have specialized names. Bloodies, which is the name used by the company, are an opaque white base with transparent red and translucent brown swirls.

American Agates, again the name used by the company, are an opaque white to opalescent white base with a swirl that ranges from translucent electric red to transparent electric orange. Many of these are hand-gathered.

Diaper-fold, a name applied by collectors today, refers to a swirl that is a single seam pattern. When viewed from the side, the swirl pattern looks like a diaper on a baby.

Turkey, another name applied by collectors today, is a swirl pattern that looks like the head of a turkey.

Another very rare marble is the Layered Sand. These are two or more color opaques, that look like layered sand are in bottles.﻿ 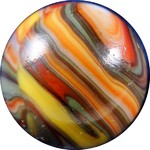 Christensen Agate Company also produced a marble similar to the swirls. These were an opaque or transparent base with a series of color bands on the surface of one side of the marble, and little or no color on the other side or inside. Usually, the band colors are “electric” and the base can be either opaque or transparent. These are referred to as Striped Opaques and Striped Transparents.﻿

The “World’s Best Guineas” are a transparent based marble with colored flecks of glass melted and stretched on the surface. Occasionally, you will also see these flecks inside the marble, particularly in seamed examples (Guinea-Cobra). We have been told that the name Guinea originated because the marble colors looked like the heads of the Guinea Cocks that ran around the factory yard. The most common base color is clear, followed by cobalt, and then amber. Some green based Guineas have surfaced, but these are very rare. The value of a Guinea is also affected by the number of colors on the surface and the intricacy of the pattern.

Cobras (earlier called Cyclones by collectors) look like Guineas with all the stretched flecks of colored glass inside the marble. They have only been found in clear base and transparent blue. Some Cobras have all the color on one end of the marble and are obviously hand-gathered. These are exceptionally rare.

Unfortunately, there are several different types of fake Guineas that have produced in the past couple of years. See the Reproduction Guide for more details.﻿