A Sulphide has a transparent base with a sulphide figure inserted inside it. They  are  single-gather, single-pontil marbles.

The  most common figure  found in a Sulphide marble is an  animal. Barnyard animals, household pets, squirrels, and birds  are  most common. Wild animals including razorbacks, elephants, and  lions  are  a little less  common. 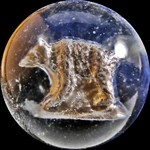 Human figures are  more difficult to find. These can  be either full length figures, or busts. Generally, they  are  historical.

Mythical  or  allegorical figures are  rarer  still, as  are  angels. It is generally believed that angels are mourning or remembrance pieces. Angels come in a variety of styles. 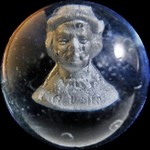 There is a  series of  Sulphide marbles that  contain the  individual numerals 0 to 9.

There are  also  Sulphide marbles with  figures of inanimate objects in them. These are  usually coins, numerals on  disks  or  pocket watches. They  are  extremely rare.

Some sulphide  figures  are  painted.  We  have seen figures that are painted (simply or elaborately), as well as painted numerals and inanimate objects. The  value  of these is greatly affected by the  degree of color coverage, the brightness of the colors, and the number of colors used.

A very few sulphide figures have been found in transparent colored glass. A number of shades have been found, including blues, greens, yellows, amethysts, browns, and  pinks.  These are  very rare.

Also,  an extremely few Sulphides have been found with more than one  figure  in them. These are  also  extremely rare.

Figures that are off-center in the marble can be greatly discounted in value  (by as much as 50%  or more). A figure  can  either be  too  close to the right or left side  of the marble, too high or low, or set too far forward or back. 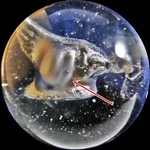 Finally, because Sulphides are single-pontil marbles, there is always one pontil on the surface. In some cases, this pontil is ground down. If the pontil is on the bottom pole  of the marble, then the figure can be viewed properly from  all angles. However, depending on the  skill of the  maker, the pontil  could end  up anywhere on the marble in relation to the figure. In some instances, the  pontil  obscures viewing one  side  of the  figure. This can  result in a discount on the  value  of the  marble (up to 40%).

In 1993, a group of Sulphides surfaced that  have become the source of great controversy in the marble collecting community. These marbles have been dubbed “California  Sulphides” because there was  only  one person who  was selling them, and  he  was from  California.  Without getting into the whole history of the events surrounding the introduction of these marbles to the market, it is safe to say that the marble collecting community has  been pretty much divided as to whether these marbles are as old as traditionally known sulphides, or are modern reproductions, or are  older but  not  as  old  as  antique Sulphides. You must reach your own  conclusions as to the  age  of these marbles.

They  can  be  identified by  several features. Many  of them were in colored glass (usually very dark) or a light Vaseline color. Many contained multiple figures (two  or more). Many  were figures that  had  never been seen before (seahorse, lady riding a horse side-saddle, etc.). None of the figures had  a silvery  sheen to them, and  many had  a light rust-red haze on them. Very few of the marbles fluoresced under a black light (traditional sulphides usually fluoresce). Many had either a polished surface or an unpolished surface that  had  many tiny fissures in it when viewed by a 10x lens.

There are  some Sulphides that  have appeared with crudely painted birds in them, usually on  colored glass branches. These are definitively identified as  Chinese, as  the  same figures exist  in Chinese paperweights. They  are  believed to be from  the  1960s and  1970s. 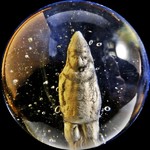 Finally,  a set  of numerals, 0 to 9, was  produced by an  Italian  glass house in the late 1960s and  brought to the U.S. by a New York importer. They  are  easily  identifiable  as contemporary 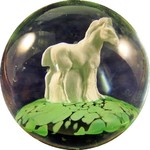 NEXT: ALL OTHER HANDMADE TYPES