The Master Marble Company was founded in 1930 by four former employees of the Akro Agate Company. The company closed in 1941 and the machinery was purchased by one of the former owners who formed The Master Glass Company.

Master Glass closed in 1973.The Master Marble Company used machinery which was similar to Akro Agate’s. Due to the design of the machinery, Master marbles have a unique pattern at either end. At either end you can see a small “V” of the color on one side of the marble indenting into the color on the other side.﻿

The most collectible Master marble is the Sunburst, and a related marble called the Tiger-Eye. The Sunburst was an attempt to duplicate handmade onionskins. The marble is a transparent clear base with filaments and strands of various colors running from pole to pole and completely filling the marble.

Some Sunbursts have clear patches or areas in them and are referred to as Clear Sunbursts. A Tiger-Eye is a Sunburst that is almost completely clear. It has filaments and strands forming a wide, flat ribbon in the center of the marble. They are rarer than Sunbursts. The colors are usually orange, white, and black in a transparent clear base.﻿ 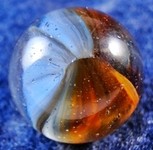 The Master Marble patches are identifiable by a “V” or “U” pattern and feathering seen at each pole. The patches were made in a variety of patterns, including two-color opaque, two-color translucent, and opaque with a second color brushed on. Master Marbles’ colors are fairly unique, although generally duller than Akro’s.﻿ 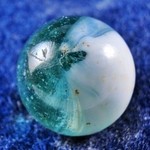 Master Marble and Master Glass made a variety of clearies, opaques, and cat’s-eyes (Master Glass only).

Master clearies and opaques all have the typical “V” or “U” pattern at either end.

There are a series of Master Marble Opaques made in the early 1930s that are valued by collectors, due to their unique color. They are a translucent Opaque in blue, aqua, green, white or lavender. The marbles have a soft, silky look to them and are often found in World’s Fair boxes, and gift boxes of the same time period.