Lawrence Alley operated factories in at least four different locations in West Virginia (in chronological order: Paden City, Sistersville, Pennsboro, and St. Mary’s) between 1929 and 1949. He also may have operated a plant in Salem, West Virginia.

In 1949, he sold the St. Mary’s plant to Berry Pink and Sellers Peltier, and they changed the company name to Marble King. As well as moving around, the company changed its name several times during its existence. Variously, it was known as Alley Agate Company, Lawrence Glass Novelty Company, and Alley Glass Manufacturing Company.

Most Alley marbles were distributed by J.E. Pressman.﻿

Alley produced a large variety of transparent, translucent, and opaque swirls, as well as Chinese Checkers.

Many of the swirls have “flame” designs to them. Some collectors believe since Alley began operations soon after Christensen Agate Company ceased operations, that the Christensen Agate machinery and/or workers ended up at Alley. No corroborating evidence has turned up yet in research to support this hypothesis, but it is an intriguing possibility.

Alley produced a large variety of two and three color swirls (#285,#286), as well as single color opaques and clearies. Sizes range from 3/8” to about an inch. More research is needed in order to positively identify the unique marbles made by Alley.﻿ 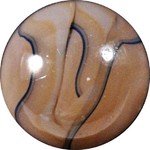 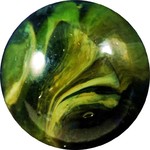 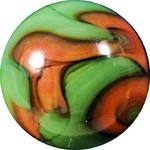 It is known that Alley produced marbles using metallic color, as well as a type of oxblood. As mentioned above, many of the swirls feature flame pattern reminiscent of Christensen Agate.

Another two types of Alley that are often found are the coral and green and the aventurine swirl. 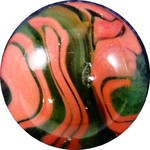