AGATE AND OTHER MINERALS

Agate is a colored variety of quartz that was hand-ground into marbles. They were a favorite of many marble players, especially as shooters. This is because Agates are denser than other marbles. This made it easier to knock an opponent’s marble out of the ring.Hand-cut Agates are generally found in carnelian or banded varieties. The banded varieties have distinct concentric rings on the sphere. They command a value that is about double the carnelian examples. Carnelians are a more uniform brownish-red color.

Many agate marbles have subsurface moons because of their extensive use as shooters.

There are many machine-ground Agates available. These are modern. Hand-cut agates have tiny facets on the surface. You can see the light dance on the surface if you look closely at the surface while turning the marble.

There are also dyed agates available. Some of these are older hand-cuts and some are modern. A chemical process and pressure is used to accentuate the brightness of the natural colors, or even to change the natural color. These are referred to as dyed agates and are found in green, blue, and black, and occasionally in yellow.﻿

Click any marble to see a full screen image. 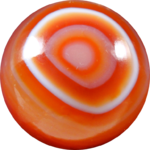 There are many Mineral spheres available. Most of these are not true marbles, but merely minerals in the spherical shape. Almost all are modern. Some marble collectors add these to their collections because they display well. However, most of these were never intended to be used to play the game of marbles, although some were produced to be used in solitaire-type games.

Aside from Agate, the only stones known to have been used to produce marbles in any significant quantity are Limestone and Shale. These were produced extensively in both Germany and the United States. Production in Germany can be traced as far back as the late 1700s. U.S. production began in the late 1800s in Ohio. Both countries produced marbles from these materials into the first quarter of the twentieth century.

A number of Other Mineral spheres are available. Among the more readily available are Tigereye, Onyx, goldstone, malachite, snowflake obsidian, and quartz. Most of these are modern, although there are some antique handcut Tigereye marbles.﻿

Click any marble to see a full screen image.

NEXT: OTHER NON-GLASS MATERIALS