BACK: END OF DAYS

A Clambroth is a swirl that  has  an opaque base with colored strands on the  surface. The strands are  generally equidistantly spaced.

The  base color  is  usually  opaque white.  Some opalescent  bases have been found. The most common colors for strands are pink, blue  or green. A Clambroth that has strands of more than one color, usually alternating, is called “multicolored”. These are rarer than the single- color  marbles. Marbles with a base glass color  that  is not white, usually black or blue  are  also  rare.  Translucent examples are  also  rare.

There are  two  different types of glass that  were used for the  base glass. One type  is relatively hard, like other glass marbles, and  does not chip  easily. The  other type  is very  soft  and  bruises quite  easily. Some collectors believe that  the  hard type  is German, while  the  soft  type  is early American, though they could just be different German makers. This does not appear to affect  the  value  of the  marble.

Missing strands or poor spacing of the  strands results in a discount. Clambroths usually have eight  to  eighteen strands (depending on  the marble size). There are some Clambroths that have thirty or more strands. These are  called “caged” Clambroths and  are  very  rare.  There are  also Clambroths that  are  “cased” in a layer  of clear  glass. These are also  very rare.

Click on any image below to see it full screen. 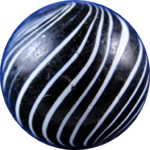 A Banded Opaque has either an opaque or translucent base glass. The surface of the  marble has  colored strands, bands or stretched colored flecks on it.

A “swirl-type” banded opaque has colored strands and bands that are unbroken from pole to pole. An “end-of-day-type” banded opaque has bands of stretched colored flecks on the surface. The stretched flecks generally are not continuous from pole  to pole.  One type  does not seem to be any rarer than the other, but the “swirl-type” are valued slightly higher, probably because they  tend to look better-designed.

There is a rare  type  of banded opaque called a “Lightning Strike”. This  is a white  base marble with  several bands around the  equator in several colors. The bands look like lightning bolts.

There are also banded opaques with a base that is satin  glass. These are  extremely rare.

Click on any marble below for a full-screen image.

An Indian is a banded opaque marble that has an opaque black base. On  the  surface are  bands consisting of  colored strands or  stretched colored flecks.

A “swirl-type” Indian has colored strands that  run  unbroken from pole to pole.  The bands can be a solid color, or a colored band that consists of subsurface opaque white  strands covered by a transparent color. An “end-of-day-type” Indian has  bands of stretched colored flecks that  do not run continuously from pole  to pole. “Swirl-type” Indians are  about as common as “end-of-day type”  Indians, but  are valued more highly, probably because they appear to the eye to be better designed and  have more eye  appeal.

The surface usually has two bands on it. Multi-band examples are rarer and command a premium. Generally, the more surface area that is covered by  color, the  more valuable the  marble. Indians that  are  completely covered by color  are  called “360 Indians” (360 degrees).

There are marbles with a translucent dark red or dark amethyst base glass. These are  called “mag-lites” and  carry  a premium. Blue, green or amber translucents are  much rarer.

Click on any marble below to see a full-screen image.