ALL OTHER AMERICAN MARBLE COMPANIES

The Kokomo Opalescent Glass Company was founded in 1888 in Kokomo, Indiana, and continues to operate today. The company produces rolled glass, which is used in windows, lamps, etc.

In the late 1930s, Kokomo purchased a marble making machine from Peltier Glass Company and used it to produce marbles made from the glass rejected in their rolling process. Production continued from about 1939 to about 1942. The machine was returned to Peltier shortly thereafter. Kokomo produced patch, ribbon, and opaque marbles, similar in design to Peltier’s. This makes them difficult to identify. ﻿ 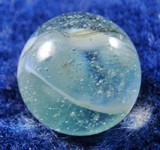 The Ravenswood Novelty Company began operations in 1932, under the guidance of John Turnbull. Operations ended in 1955, when Turnbull’s son-in-law, Paul Cox, who ran the company after the deaths of Turnbull and his wife, decided to close the plant. It has been reported that as late as 1959, Ravenswood was supplying industrial marble to Krylon Paint for use in spray cans, though these marbles may have been purchased from Vitro Agate. Ravenswood’s marble machines were sold to Bogard Glass Company, and later moved to Champion Agate Company.

Ravenswood made transparent and opaque swirls. Typically, marbles with an opaque base will be swirled with translucent or transparent, and those with transparent base will be swirled with opaque swirls. Many transparent swirls contain one color, in addition to wispy white swirls. Common base colors include white, light green, green, light blue, yellow, light purple, and cream. Brown is the rarest. Swirls can contain two, three, and four colors. Many Ravenswood swirls are very unique in terms of coloring and design. Many of the swirl designs are similar to Christensen Agate and Alley Agate. 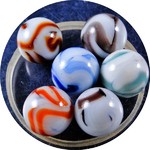 The Champion Agate Company began operations in Pennsboro, West Virginia, in 1938. It was founded by Lawrence Jacup Jones, J.B. Murphy, Roy Michels and Ralph Michels. Ownership passed over time through several members of the Michels family.

The first marbles the company produced were clearies and Chinese Checkers. Very soon thereafter, the company moved into opaque swirls, transparent swirls, and opaque patches. In the mid-1970s, the company ceased production of all swirls and patches, concentrating on Chinese Checkers. However, from time to time, Champion would do limited production runs of swirls. This began with the red, white, and blue swirls in 1976 that were the company’s contribution to the “Bicentennial Special Pack”, a package of marbles containing examples from most of the companies still operating at that time.

Champion revived two old styles in 1983 and 1984, the “Whirlwind” and “Old Fashioned”. Champion also produced a variety of the “wire pull” during this period. Other types appeared in subsequent years, perhaps most prominently the “Furnace Scraping” marbles of 1994. Champion continued to produce marbles at least through the mid-2000s.

Most Champion Agate opaque swirls are opaque white-based. On these marbles there is usually one color in addition to the white, with swirl patterns forming ribbons that fill little of the base glass, as opposed to the swirls by many other companies that cover the majority of the white. During the 1950s, Champion began production of transparent and translucent base swirls. Many of Champion’s swirls are difficult to distinguish from those made by other West Virginia companies during that time.

The Alox Manufacturing Company began operations in 1919 in St. Louis, Missouri. It was founded by John Frier. They distributed the marbles of other companies until the early 1930s, at which point Alox began producing their own marbles. Production ceased during World War II, then began again for a few years. They distributed marbles until the early1960s. The company itself was operational until 1989, however it did not sell marbles during the final quarter century of its existence.

Alox produced Chinese Checkers, as well as opaque and transparent swirls. The swirls were included in their “Three-in-a-Row Tit-Tat-Toe” boxes and in mesh bags. Most of the swirls are indistinguishable from those made by the other manufacturers of the time. However, some of the transparent swirls are fairly unique. These tend to have clear, green or blue bases with thick opaque white swirls. 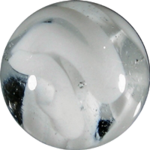 Caroll Jackson founded the Jackson Marble Company about 1945, near Pennsboro, West Virginia. He had previously been a machine operator at Champion Agate Company. The company did not exist for very long and is generally believed to have produced about two boxcars full of marbles, approximately 6 million marbles.

Most of the information we have on Jackson marbles comes from digs in the area of the factory site. Jackson marbles often have dull, transparent colors, although they can exhibit attractive combinations and swirl patterns.﻿

Wilson Davis founded the Davis Marble Works in 1947, in Pennsboro, West Virginia. He was a World War II veteran and purchased an old Alley Agate marble making machine from Corning Glass. Like Jackson Marble Company, Davis Marble Works did not operate for long. Production ended in 1948. It is estimated that approximately 14 million marbles were produced, the majority of which were sold to a toy company in Puerto Rico.

Most of the information we have about Davis marbles comes from digs in the area of the factory site. Davis produced mostly transparent swirls, some with distinctive shades. ﻿

Playrite Marble and Novelty Company operated from late 1945 until late 1947. It was located in Lamberton (now Ellenboro), West Virginia, in a lot that was later used by Mid-Atlantic for their marble factory outlet. The owners were Jesse Krupp, Andy Long, and Lawrence Jones. In early 1946, C.A. Wilson and Joseph Wilson purchased the stock of the company.

Playrite produced swirl type marbles. When the company closed, they needed bags for the leftover marbles. They acquired a number of unused Jackson Marble Company mesh bags with the Jackson header labels and filled those with Playrite marbles.﻿

The Cairo Novelty Company began operations in 1948 in Cairo, West Virginia. With the financial backing of two local merchants (John Sandy and Dennis Farley), it had been formed late in the prior year by Oris Hanlon, who had left Heaton Agate Company. The company had only one marble machine, but a design innovation by Hanlon (which is patented) allowed it to produce marbles at a fifty percent faster rate than any other machine at the time.

The company produced a wide variety of swirls from peewee size to 3/4”. Many of these marbles fluoresce. Their major account was Woolworth’s, and they packaged mesh bags with the Woolworth’s label on them. Cairo also marketed marbles in boxes with their own name. Both of these original packages are hard to find. The company also produced and marketed a game called “Trap the Fox” in the late 1940s. The game included black and white swirls (the hounds) and an opaque marble (the fox).

A flash flood in 1950 seriously curtailed operations, but Cairo was able to produce marbles until 1953. ﻿

Mid-Atlantic started as Mid-Atlantic Glass Company in 1937 in Ellenboro, West Virginia. The company produced stemware, table glass, and similar items. While marble machines were built in the 1990s at Mid- Atlantic, it appears that playing marble production occurred mostly in 2001. Mid-Atlantic went out of business in the mid-2000s. The marbles produced were transparents and swirls.﻿