The Akro Agate Company was formed in 1910 in Akron, Ohio. It was moved to Clarksburg, West Virginia, in 1914, where it remained until its bankruptcy in 1951.

The company originally repackaged marbles bought from the M.F. Christensen and Son Company. By the time the company had moved to Clarksburg, it was operating its own marble making machinery and producing marbles.Throughout most of the history of the company, Akro Agate was the largest manufacturer of marbles in the United States. The company introduced a number of improvements and design changes to its machinery, which yielded several different types of marbles that could not be replicated by competitors.

Many Akro Agate marbles are very collectible today.The company produced both single-stream and variegated stream marbles, in all types except ribboned and veneered.﻿

As with many of the other manufacturers of the time, Akro Agate produced a staggering number of single-color marbles. They produced both clearies, which are transparent clear or transparent colored glass marbles, and opaques, which are opaque colored glass marbles. These marbles have little value to today’s collectors for several reasons. First, they were produced in such mass quantity that they are abundantly available. Second, since they were the easiest marble to produce, every marble company produced them. It is virtually impossible to distinguish between each company ’s marbles of this type. Finally, because the marbles are only one color, they do not have much eye appeal. Akro referred to their early opaque marbles as “Opals”.

A series of opaques that were produced with opalescent glass is the exception to this. Opaque marbles of white opalescent glass were called Flint Moonies by the company and are referred to today as Moonies. Opaque marbles of colored opalescent glass are referred to collectively as Flinties. Brown is the most common, followed by yellow, green, red, and blue. These marbles are actually semi-opaque and have a distinctive orangish glow when held to a light. Later examples have tiny open ends at each pole, called “fisheyes”. The Moonies are relatively easy to find. The Flinties are more difficult. It appears that Flinties were not produced in as great quantities as Moonies and these marbles are often mistaken for game marbles by collectors. Flinties can be found in many No. 150 and No. 200 tins. They were also marketed under the name “Fire Opal.”﻿

The other single-stream marble that Akro Agate produced was the Slag. Akro Agate produced a large quantity of slags. It would be a fair statement that there are more Akro Agate slags available than those of the three other slag manufacturers (M.F. Christensen, Christensen Agate, and Peltier) combined. The most common color is amber, followed by purple, blue, green, red, aqua, clear, yellow, and orange.﻿

Akro also made a single-stream opaque-type of slag called the Cornelian. This marble is a combination of opaque red and white glass, and is very similar to a Brick. The color is not as oxblood-red as a Brick though. Akro Agate also produced a type of Brick. These are darker than the M.F. Christensen Bricks.

Akro Agate produced several different types of variegated-stream swirls. Some of these swirls that are collectible today were produced in the same colors as the corkscrew “Ades” (discussed below).

The most common and easily recognizable Akro Agate marble is the Corkscrew. This is a variegated-stream marble whose design is unique to Akro Agate. Two or more streams of colored glass were allowed to enter through the marble-making machine’s shearing mechanism at the same time. Because the different colors were layered as they came out of the furnace and because the colors were of different densities, they created separate strata in the glass stream as it entered the shearing mechanism. Just before the shearing mechanism in the Akro machinery there was a small cup with a hole in the bottom. The glass stream entered the cup from the top and passed through the hole in the bottom into the shearing mechanism. If the cup was spinning, then a corkscrew was created. If the cup was not spinning, then a patch was created. The number of different colored spirals in the corkscrew, or the number of different color patches was determined by the number of nozzles that had glass flowing through them when the glass stream was created.

Corkscrews are identifiable as being two or more spirals of color that rotate around the marble from one pole to the other, but do not intersect. Different color combinations and designs were marketed by Akro Agate under a variety of names: Prize Name (two opaque colors), Special (three or more opaque colors), Ace (one opaque color and translucent milky white), Spiral (transparent clear base with colored spiral), Onyx (transparent color base with opaque white spiral). In addition, other names have been applied by children and collectors over the years: Snake (a Spiral or Onyx where the opaque or colored glass is on the surface and just below it), Ribbon (a Spiral or Onyx where the opaque or colored glass goes almost to the center of the marble), “Ades” (types of Aces with fluorescent base glass), and Popeye (a specific type of Special commonly found in Popeye marble boxes).

You should be very aware that the color and design combinations of corkscrews is almost limitless. You could easily amass a collection of several hundred corkscrews, of which no two would be the exact same color combination or pattern. 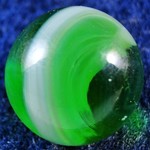 Hybrid Popeyes are marbles that have three or four colors along with the clear/white. It is popularly believed that these marbles occurred when the colors were changed in one of the machine hoppers. However, some of these examples are too perfectly formed to be an accident. They may have been intentionally made by using five nozzles, instead of four, to create the glass stream. There are some Popeye corkscrews that have a fourth color that is really just a blending of the two colored glass streams. These really are not hybrids. True hybrids are rare and are highly prized by collectors.

Some Popeyes were produced when the spinning cup in the machine was not rotating. As a result, these marbles came out as patches. They are the same color combinations as Popeyes, but are actually two or three distinct patches of color on a clear/white base. These are called Patch Popeyes and are very rare. They have been easily confused with a type of Vitro Agate patch, and have fallen out of favor with collectors at this time.

There are also several types of corkscrews that have the clear/white color combination as Popeyes, but only one other colored spiral (usually translucent red or orange) These are usually referred to as Ringers or Imperials and are not really Popeyes.﻿

Patches are another type of machine-made marble that has several variations which are uniquely Akro Agate’s. A patch is a corkscrew that was not twisted. It is a variegated stream of glass consisting of two or more colors.

There are several types of patches that Akro Agate marketed under various names, including Hero, Unique, Moss Agate, Royal and Tri-Color.

The Hero and Unique are the oldest type of Akro Agate patch. These appear to have been produced for a short period of time during the mid-1920s. Both marbles are an opaque white base with a wispy brown patch brushed on about one-third of the marble. The Unique has a small space in the middle of the patch through which the white base shows. The Hero does not have this space. Both of these are readily identifiable because they have a crimp mark at either pole. This would date them to the early to mid-1920s.

Moss Agates have a two-color patch. One color is a fluorescent translucent milky brownish/white base. The other color is a translucent colored patch (generally brown, yellow, red, blue or green) which covers one-quarter to almost one-half the marble.

An Akro Royal is a two-color patch. The base color is opaque. The patch is either opaque or transparent and usually covers about one-quarter of the marble.

There is also a three-color patch that was marketed as the Tri-Color.﻿

Another type of marble that is unique to Akro Agate is the Sparkler. This is a clear base marble with filaments and strands of various colors running inside the marble from pole to pole. It appears to be made using the same technique as some cat’s-eyes, in that various colors of glass are injected into a clear stream as it flows through the furnace. However, Sparklers pre-date all other cat’s-eyes by at least 15 years and they seem to pre-date even Peltier Bananas. Sparklers were produced in the mid to late 1920s and do not appear to have been produced much past 1930. They have generally only been found in the 5/8” to 3/4” size. Sparklers are often confused with clear Master Marble Sunbursts . They can be differentiated by several features. Sparklers tend to have brighter colors than Sunbursts. Also, Sparklers usually have five different colors in them, whereas Sunbursts have at most three different colors. There is also another marble that is very similar to Sparklers and is usually referred to as a “foreign sparkler”, which were actually made by Vacor de Mexico and in Germany. These are a transparent clear base with translucent strands of color running through the center. They usually have a tiny crimp mark at one or both poles, and occasionally the marble surface has an orange peel texture to it. These are easily distinguishable from Akro Sparklers because of their size and the translucence of the colors.﻿ 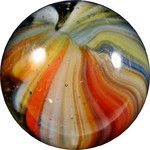