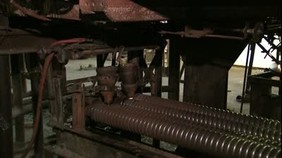 There were some notable exceptions to this, especially in the area of some easily identifiable types made by Akro Agate Company or Peltier Glass Company. But, for the most part, machine-made marbles were not given much serious attention by the majority of collectors.For several reasons, all of that began to change during the mid-1980s.

Another reason that machine-made marbles began to receive more attention was related to their historical significance. Virtually all handmade marbles were made in Germany and then imported into the United States (as well as other countries). Machine-made marbles were almost exclusively an American product for the first half of the twentieth century. The rise of the American marble manufacturing industry mirrors in many ways the ascent of the United States as global economic force. Many examples of original packaging still exist, making it easy to identify the different types and manufacturers of machine-made marbles. An interest arose in documenting and preserving this period of American toy manufacturing.

The final reason for the increased interest in machine-made marbles was nostalgia. By the mid-1980s, the kids who had played with mibs, aggies, immies, and commies in the playground had grown up. As occurred with many other collectibles over the past forty years, collectors began buying back the objects of their youth that had been lost to numerous location changes or to indifference.So, by the late 1980s, the time and environment were ripe for an explosion of interest in machine-made marbles.