Many M.F. Christensen marbles have shear marks or cut-lines on them, from the marble making process. M.F. Christensen machines did not have automatic feed systems. The molten glass had to be hand- fed into the machinery.M.F. Christensen marbles are strictly single-stream marbles. They are either single-color opaque or two-color slag or swirl. This is because the glass for a particular batch was all mixed in one furnace pot and not the separate streams used by later manufacturers.

Interestingly, there do not appear to be any M.F. Christensen & Son Company marbles that exhibit a distinctive set of three colors. The company seems to have confined itself to marbles of only one or two color.﻿

The M.F. Christensen & Son Company produced some opaque marbles. These appear to have been made in limited quantity. Some of these are transitionals. A close examination of M.F. Christensen opaque marbles reveals a faint “9” on the top pole. Generally, you can find them in green (“Imperial Jade”), light blue (“Persian Turquoise”), and yellow. There were very small number of lavender opaques produced. We have been approached by many collectors who thought that they had M.F. Christensen opaques, when the marbles were really common game marbles. In fact, these marbles are very, very rare and it is very difficult to assign a value to them.﻿

The most common M.F. Christensen & Son Company marbles are Slags.

These marbles have a swirling pattern of transparent colored base with opaque white swirls. M.F. Christensen & Son Company slags are easily identified by the “9” pattern on the top pole and the “cut-off line” on the bottom. These patterns are caused by the twisting motion used in hand gathering the glass out of the furnace and keeping the glass on the end of the punty as a stream of it was allowed to drip into the machine.

The marbles are found in blue, green, brown, purple, red, orange, aqua, yellow, and clear. M.F. Christensen slags are found in a wide array of shades of each of the colors mentioned. The brown and purple are the most common, perhaps they were the easiest or cheapest to make. The blue and green are next most common, and are fairly easy to find. Clear and aqua are more difficult. Occasionally, the aqua marbles will have a little bit of oxblood in them. Red is more difficult. Yellow is the second hardest to find and “true” orange is the most difficult color to find. Generally, the better defined the “9”, the more valuable the marble. Also, the brighter and clearer the base transparent color, the more highly valued is the marble. Some of these marbles are truly beautiful.

The value for slags varies greatly depending on the craftsmanship exhibited in the “9” and the rarity of the hue of the color. There is a wide variation in hues, even within one color, of M.F. Christensen slags. This variation is much more pronounced than you see in other manufacturers. It is not known if this was intentional, or the result of the company’s inability to accurately replicate color formulas.﻿

M.F. Christensen & Son Company made a type of slag that is different than the others. This slag is referred to today as the Oxblood Slag, although it has been reported that the company named them “moss agate.” In reality, the marble looks more like bloodstone than moss agate. The marble is a very dark transparent green base glass with a swirl of oxblood in and on it. Usually, the oxblood forms a “9” and has a tail on the other end. These marbles are often overlooked as just dark opaque game marbles because the base glass is so dark and the oxblood does not really stand out. However, closer examination reveals the oxblood. These marbles are fairly rare. Some collectors call these “green bricks”.﻿

The most popular M.F. Christensen & Son Company marble is the Brick. It was called the “American Cornelian” by the company.

The marble is a combination of oxblood-red and either opaque white, opaque black or both. The common name for the Brick derives from the fact that the marble looks like a piece of brick when it is scuffed up. Each marble is unique in its coloring and pattern. The oxblood-red with black are a little rarer than the oxblood-red with white.

The most highly sought after examples have very well-defined “9”s and tails. Many examples do not have “9”s at all and some collectors believe that these are either very late examples or perhaps marbles that were made later by the Akro Agate Company.

There are also some very early examples that are transitionals and have a pontil. These are German and not M.F. Christensen.﻿ 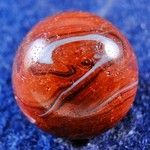