A Mica marble is a transparent base glass with mica  flakes in it.

The  most common colors are  clear, blue,  aqua, brown, and  green. Olive green and  smoky gray  are less  common. Amethyst is rare.  Yellow is rarer. Red micas are  not  quite  as rare  as true yellow,  but are  valued higher, probably because they  are  prettier.

Some Micas have ghost cores (cores of tiny air bubbles) or thin dark filaments. These are  odd, but  do  not  seem to add  greatly to the value  of the  marble. Single-pontil, multi-layer, cased, single-gather or end-of-cane marbles are very rare. 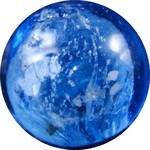 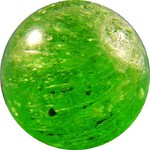 An Opaque is made from  a rod  of a single opaque color.

White  and black are the most common. White or black opaques under 5/8” are usually Ballot Box marbles. Blue, pink, and  green are  rarer. Some are referred to as Melon  Balls. Other opaque, pastel or translucent colors are even rarer. Single pontil  marbles, either single-gather or end- of-cane are  very rare.

There is also  a type  of Opaque made from  a rod  of two  opaque or translucent colors. The  rod  had  one  color  (usually semi-opaque white)  on  one  side and  another color  (usually semi-opaque green or blue) on the other. When the marble was  twisted off the end, one  side  of the  marble is one  color  and  the  other side  is the  other color. Because of the  twisting motion, the  marble looks  like a machine-made corkscrew, but has  two pontils, hence the  name “handmade corkscrew”. These are very rare.

A Clearie marble is made from a rod of a single transparent color. Clear is the most common, although light blue, light green, and light amber examples are known. Single pontil examples, either single-gather or end-of-cane, are  rarer.

Most varieties  of  cane-cut handmade marbles  can  also  be  found as  single-pontil marbles. However, almost all of these are  end-of-cane marbles, not  single-gather marbles. A single-gather marble is a marble that  was  produced one  at a time  by adding successive layers of glass onto the  end  of a punty.

Several types of cane-cut marbles were also produced as single-gather marbles. These are  End of Day Clouds, Micas,  and  Opaques. However, the  single-gather versions are  much rarer than  the  cane-cut versions.

Aside from  Sulphides, there are  two  types of  marble that  were produced solely as a single-gather marble. The first is the Confetti marble. A Confetti  marble is a transparent glass base with small flecks or chips of colored glass forming a layer  near the pontil  of the marble. The marbles are  rare.  Almost all have a transparent clear  base. I have only seen one  with  a transparent colored base, and  that  one  was  blue.  The colored flecks are  usually white, pink, yellow  or green. I have only seen them in 9/16” to 3/4” size. Larger  sizes  are  very rare,  if they  exist  at all.
A rarer type of single-gather marble is the Paperweight marble. This has  a layer  of millefiori canes at the  base.